Egami Village on Naru Island(Egami Church and its Surroundings)

Egami Village on Naru Island (Egami Church and its Surroundings) is one of the components, visually marking the end of hiding of Hidden Christian migrants of the village. In the 19th century, some Hidden Christian migrants from Sotome settled in a valley near the seacoast, some distance from the pre-existing villages on the island. They continued to practise their secret faith and finally rejoined the Catholic Church after the lifting of the ban on Christianity. They constructed Egami Church in a manner that adapts to the topography of the village. Egami Church, located in a site chosen for its suitability in relation to the local climatic conditions, is representative of churches that were constructed using indigenous techniques and strongly demonstrate cultural and technical continuity with the period of the ban on Christianity.

Naru Island is located in the central part of the Goto Islands and is characterised by its complex shoreline and steep ridges. Egami Village was established on a narrow strip of land in a valley facing the northwestern coast of the island. Egami Church was built on a reclaimed area of flat land on the southern side of this small valley.

As some documents record the existence of Japanese Catholics on the island in the early 17th century, it is highly possible that Catholicism was introduced there between the late 16th and early 17th centuries.

After the nationwide imposition of the ban on Christianity in 1614, Japanese Catholics in the Goto domain were persecuted to such an extent, by the 18th century, that none of their communities seems to have remained anywhere throughout the Goto Islands.

Beginning in the late 18th to the 19th centuries, Hidden Christians migrated from Sotome to Naru Island in a step-by-step manner. They first moved to the uninhabited island of Kazura and then to Naru Island, where they settled in the villages of Nagahae, Tsubakihara, and Nankoshi. As for Egami Village, it is said that four households migrated from Sotome. Many of these places which the migrants settled were very small alluvial plains isolated from the pre-existing Buddhist villages. The Hidden Christians established their own villages, opened up rice paddies in the plains and built houses on the sloping terrain.

The Hidden Christian communities tried to find ways out to practise their secret faith under the guidance of their own religious leaders, while adapting to the topography of the small valley to which they had migrated.

After the lifting of the ban in 1873, the Hidden Christians in Egami Village joined the Catholic Church as their ancestors did in the 16th century and used the houses of their former religious leaders as temporary churches.

Egami Church was built in 1918 on a small strip of terraced land in the valley with funds gathered from fishing for kibinago herring. Its floor level is set high off the ground, taking into account the high humidity resulting from a nearby spring. It has distinctive designs and forms similar to those of ordinary houses in the village, such as ornamented vents in the soffits that help to ventilate the interior of the building. The church is a timber constructed building with painted timber siding on its external walls. The main part of the building has a pitched roof over the main nave with individual roofs over aisles, while the rear part has an additional shed roof attached to. Inside of this projected rear part is the altar. The internal space has three naves with three vertical elements: arcades, triforium-like decorative belts, and arches on the upper walls. The ceiling is rib-vaulted while king post trusses are applied to its roof structure. Egami Church is the best example in terms of design and structure among the wooden church buildings constructed in the Nagasaki region from the 19th century onwards. Constructed in a small valley on this remote island seashore, in a setting characteristic of the area to which the Hidden Christians had migrated, Egami Church reflected the desire of the local people to have their church design express the western architectural features typical of conventional Catholic churches, in combination with their traditional local architectural design and techniques. Egami Church most clearly showcases the transitional phase and ultimate end of the Hidden Christians’ hiding in the Nagasaki region. 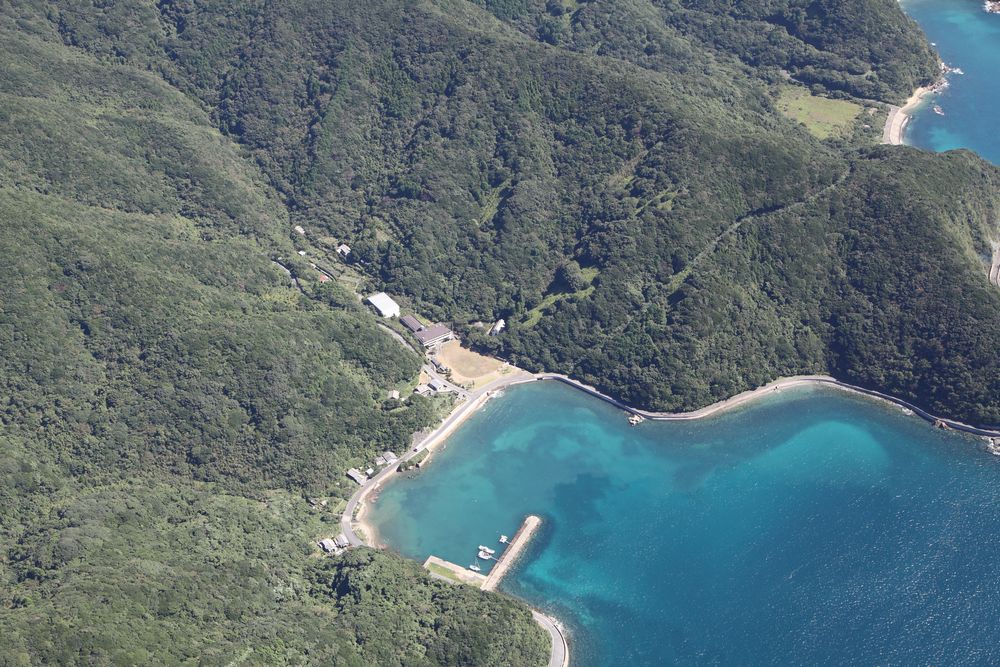 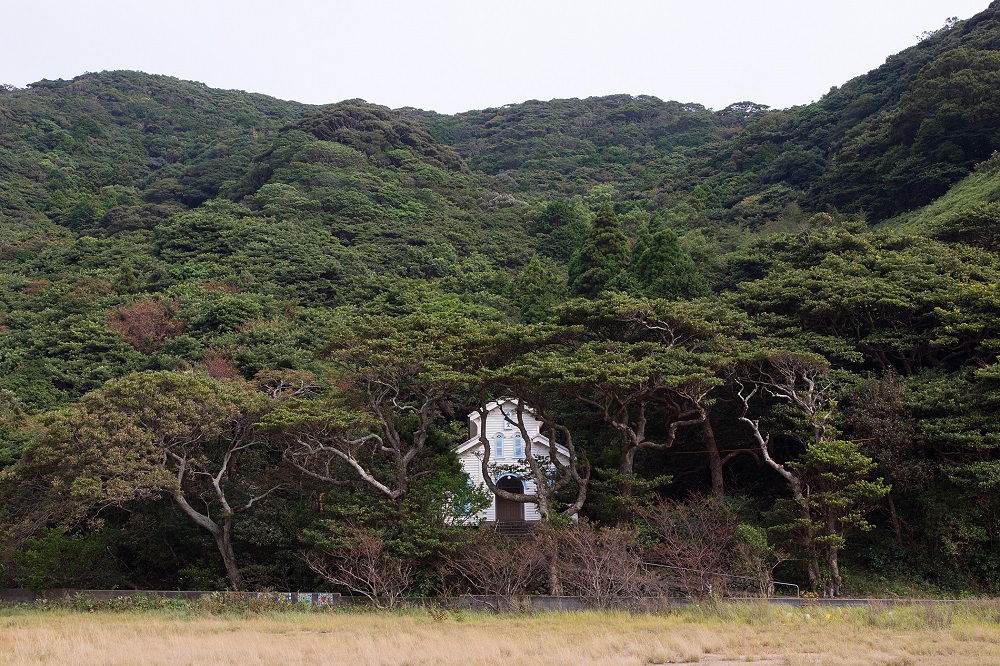 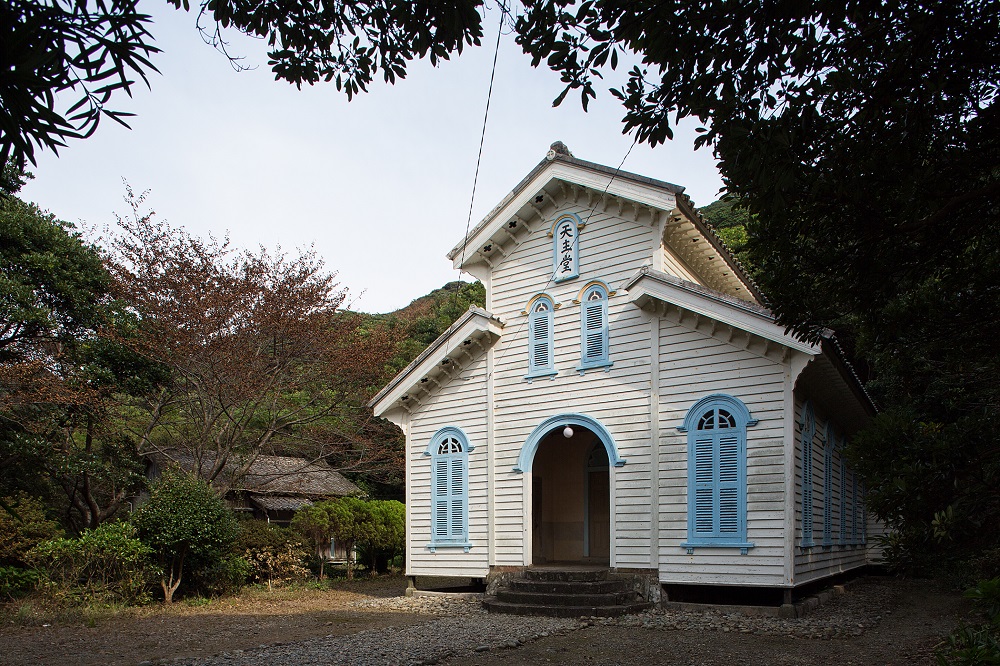 04_Interior of Egami Church (a picture taken by Higurashi Yuichi) 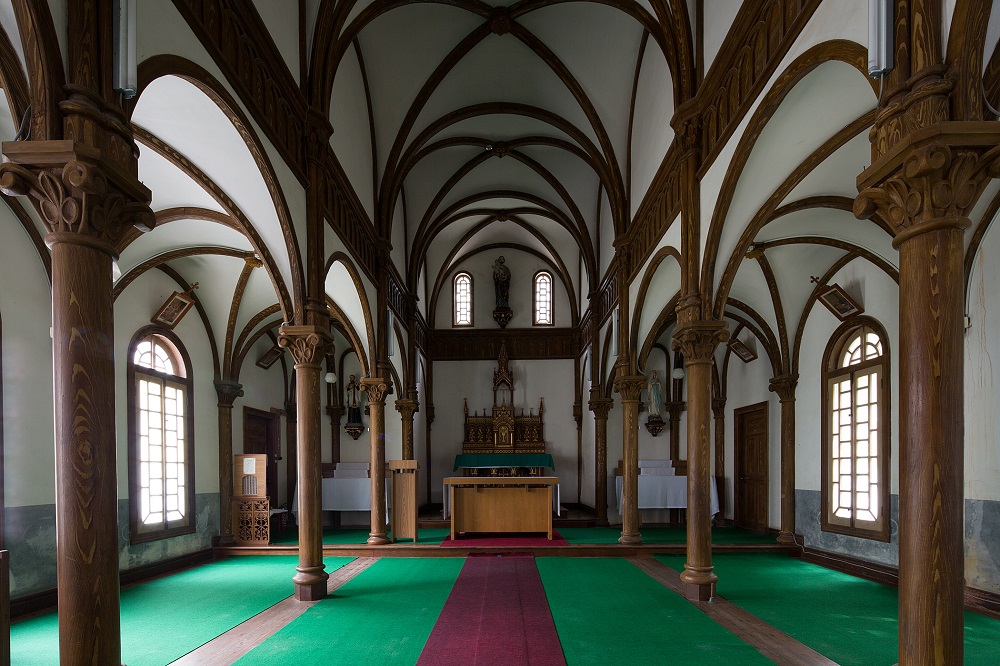 05_Watercourse behind Egami Church (a picture taken by Ikeda Tsutomu) 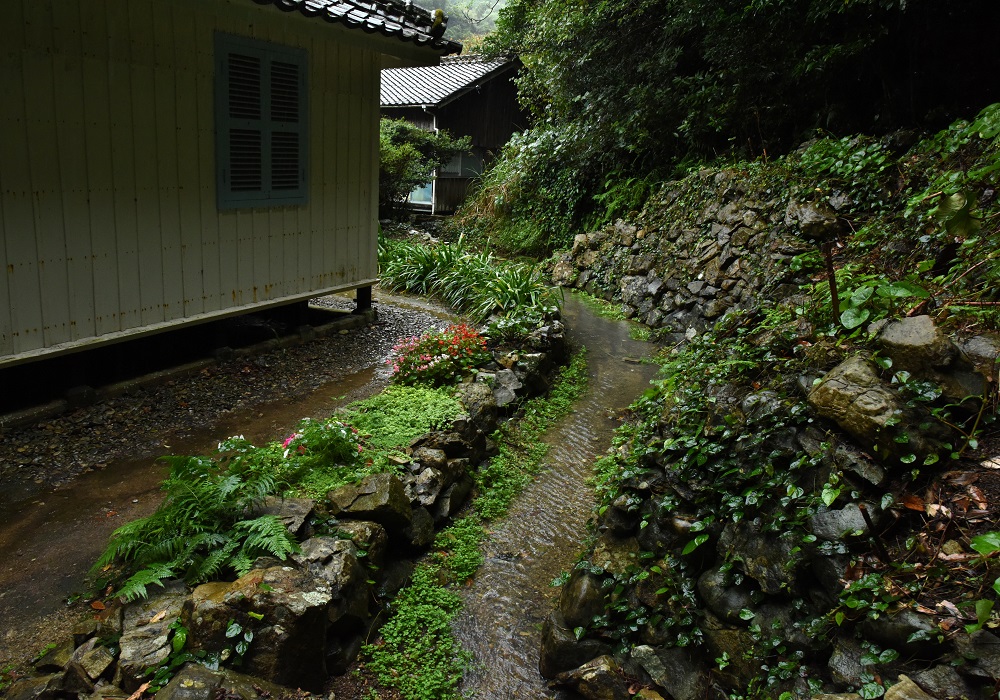 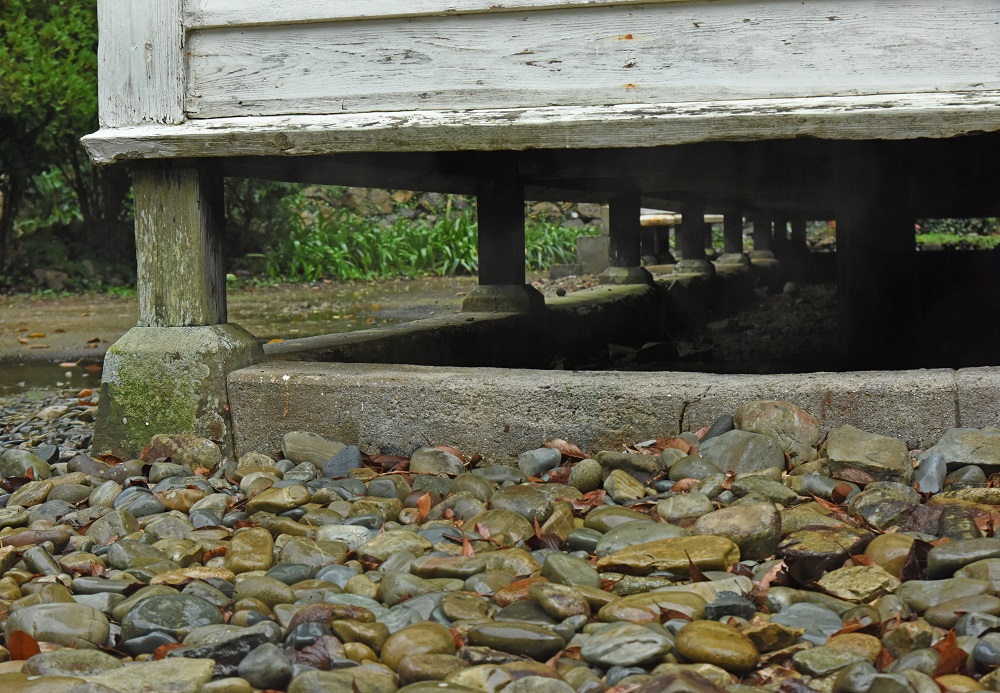 07_Ornamented vents in the soffits (a picture taken by Ikeda Tsutomu) 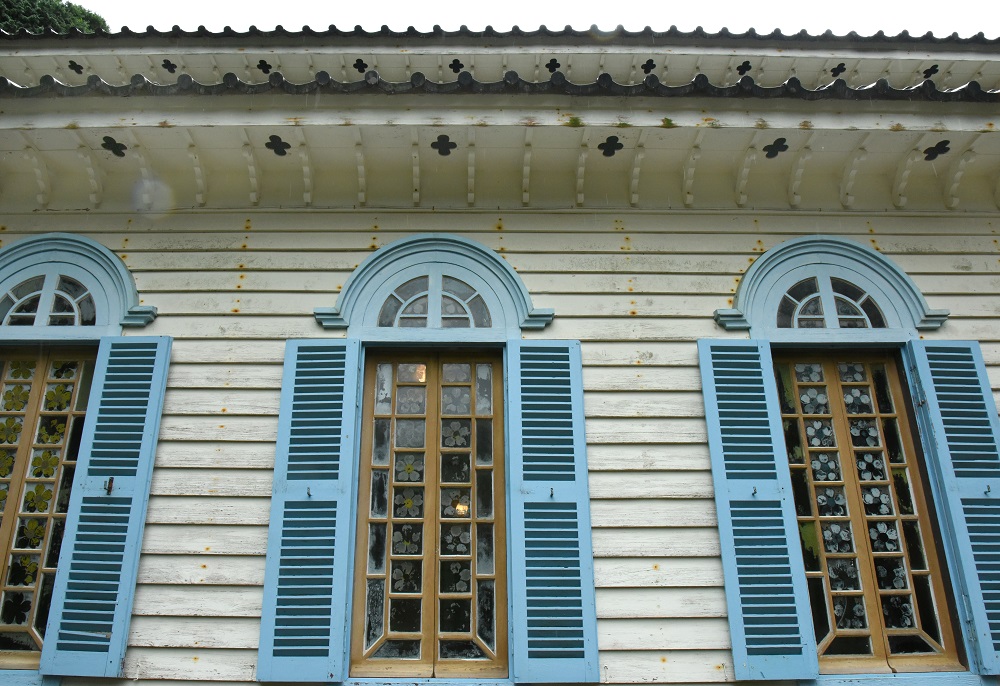 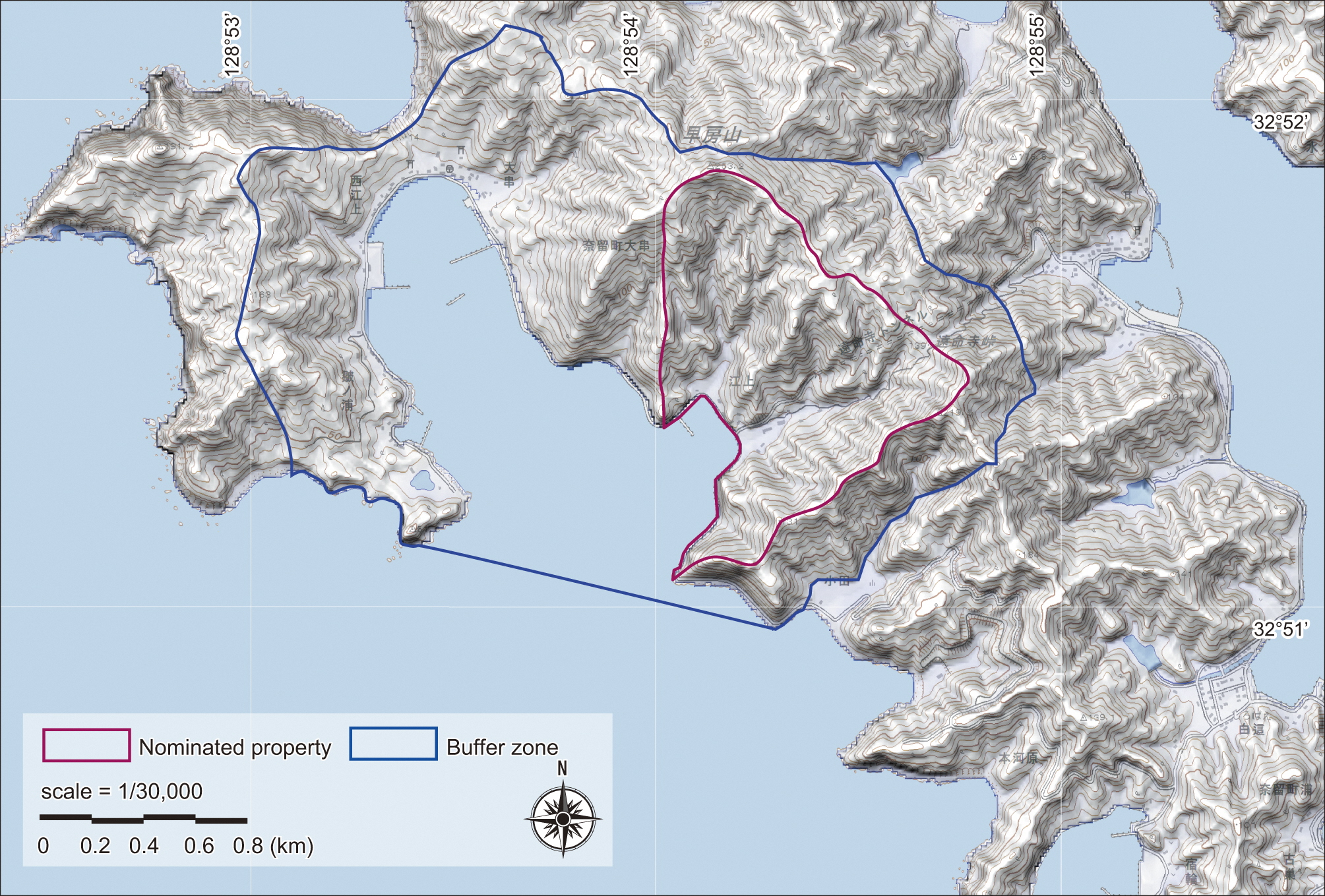